In this essay I try to illustrate two phenomena. The first is that biochemistry was trying to become an independent discipline after World War II by concentrating on the study of enzymes. That is, it tried to bridge the gap between chemistry and biology by taking enzymes as its preferred object of study. In the1950s, enzymology became an icon of biochemistry as a basic, pure science. This allowed biochemistry to disengage itself from the more applied type of science practiced in the medical and agricultural sciences and to formulate a common basis. The second observation is that the promotion of biochemistry as a basic science coincided, on the one hand, with the training (at both graduate and postdoctoral levels) of scientific researchers. On the other hand, as national authorities in various Western countries began to regard basic scientific research as a govern- ment task after World War II, jobs became available for a growing group of researchers. When universities experienced an exponential growth in the interest in scientific education, biochemistry as an interdisciplinary field of study offered opportunities for experimental studies of a wide variety of experimental models: Enzymes could be isolated from bacteria, plants, invertebrates, mammals and humans, allowing comparative studies.

The development of biochemistry as an independent discipline of basic science is illustrated and analyzed below by the case of the Enzyme Institute, which was founded at the University of Wisconsin. This institute was established in the 1940s, with financial support from the Rockefeller Foundation (RF). The creation of the Enzyme Institute is a striking example of the way in which a range of applied biochemical research efforts were integrated by concentrating on enzymes as objects of basic scientific research. The fact that the Enzyme Institute could be fitted out with the expensive equipment required for physical and chemical research on biological objects from medical, biological, and agricultural science, and the training it provided for researchers, made it an early focal point of postwar biochemistry. It institutionalized biochemistry as an independent basic science through its choice of research methods, techniques, and objects, and by training novices. Thus, enzymes were mobilized as unifying agents for the institutionalization of biochemistry. 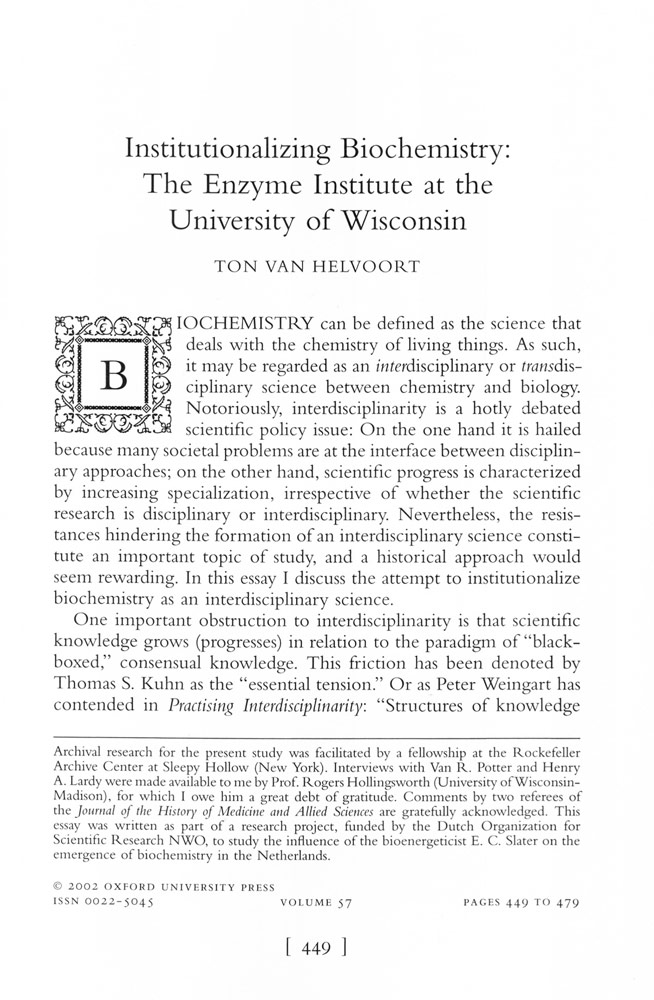