The conflicts over the introduction of radiotherapy in Germany are well documented by archival and published sources, because during the 1930s a struggle developed over the Institut fur Krebsforschung (Institute for Cancer Research; hereafter IfK) of the Berlin Charite hospital. At that time, the IfK was led by the Jew Ferdinand Blumenthal (1870-1941), who had also been deputy head when the Institute was established in 1903 by Ernst von Leyden. Von Leyden, who had been a professor of internal medicine in StraBburg before he was appointed head of the First Medical Clinic of the Charite in 1885, was Germany's leading internist and became the first director of the IfK. After a period in which the Institute was led by others, Blumenthal had become director in the mid-1910s, and in the late 1920s he worked towards the centralization and regulation of German cancer control in general and of radiotherapy in particular. In this he was supported by the Reichsausschuss fur Krebsbekampfung (State Committee for Cancer Control), which was inaugurated in 1931, signalling the first definite involvement of the German state in this aspect of public health. Blumenthal's desire for centralization, backed up by the Reichsausschuss, met with powerful resistance from other Charite clinics, the medical faculty of Berlin University and the German societies for surgery and gynaecology. In the early 1930s, the latter specialists successfully penetrated the Reichsausschuss, and National Socialist measures against Jews helped to ensure the neutralization of attempts to centralize radiotherapy in Germany and to establish one or two national cancer institutes. Thus, the actual development of radiotherapy in Germany differed from that in countries such as France, England, Sweden and the USA. It will be argued below that this was related to the strength of German orthodox specialists, the costly nature of radium and the lack of German resources for radioactive substances, as well as to the absence of a philanthropic tradition with regard to cancer control and research and the reluctance of the German state to support the latter.9 It must be admitted that the tension between surgeons and medical specialists on the one hand and radiotherapists on the other about the jurisdiction over the new cancer treatment modalities occurred in all countries, but the specifics of the German situation made the disaccord more visible and the consequences more enduring. 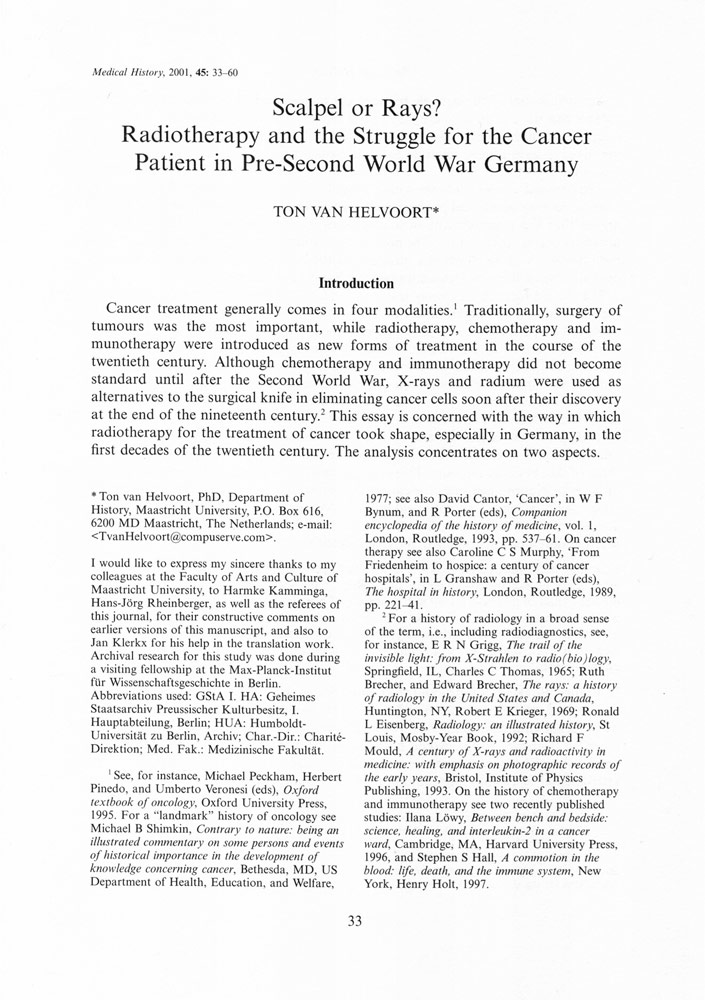