The first section of this paper outlines the state of cancer research around the turn of the century and describes the founding of the Institut für Krebsforschung by Ernst von Leyden, while the second section discusses the attempts by Emil Fischer and Georg Klemperer to treat cancer by means of chemotherapy. The failure of this research project almost led to the institute’s demise. Section three describes how Ferdinand Blumenthal managed to lead the IfK to new successes by making radiotherapy the institute’s main therapeutic modality. The next section deals with the experimental research which earned Blumenthal and his co-workers international recognition. They experimented with transplantation tumours, chemical carcinogenesis and cancers in chickens and plants, and studied tissue cultures. When, in 1928, the state took over the financial responsibility for the institute, the IfK appeared to have stabilised its position. Section five discusses the criticism levelled at Blumenthal’s experimental approach by pathologists and clinicians. They challenged the relevance of the experimental systems used by Blumenthal’s group for human cancer research. Section six outlines Blumenthal’s attempts to have radiotherapy in Germany regulated, and particularly to centralise the use of radium. As a result of these attempts, he now also came under attack from surgeons and gynaecologists, who felt that the use of radiotherapy came under their jurisdiction. In 1932, Blumenthal was confronted with a cut in his institute’s budget, which he interpreted as being the consequence of the criticism of his experimental and therapeutic approach by pathologists, surgeons and clinicians. When the National Socialists came into power, all staff members of Jewish descent were dismissed, which meant that the institute was virtually dismantled. Section seven shows how attempts were made to reposition the institute and give it a new lease on life, attempts which were thwarted by the lack of agreement on the future lines of development. The essay ends with a discussion of the human cancer problem and concludes that the confrontation between Blumenthal’s approach to cancer research and the traditional clinical approach can be characterised as the persistent tension between a reductionist, laboratory approach and a more patient-oriented, holistic approach. 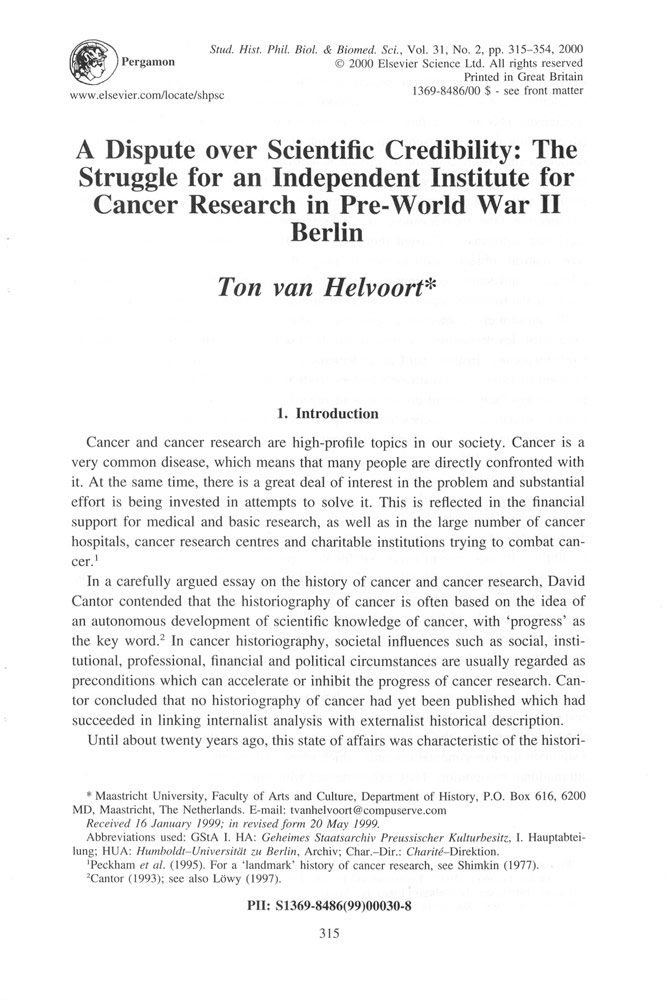