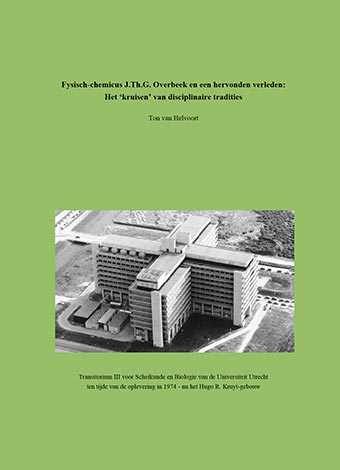 Physical chemist J.Th.G. Overbeek and a recovered past:

The exponential growth of the number of scientists working at universities after World War II poses a challenge in terms of saving the past. In order for future historians to reconstruct and write about developments in the sciences of the last seven decades, it is crucial to have access to at least a substantial volume of hardcopy and digital archives. Unfortunately, most of the ‘evidence’ usually disappears into the physical and digital dustbins. This paper illustrates that a rich story may be recovered from preserved scribbled notes, minutes, letters and reports. The archive of physical chemist J.Th.G. [Theo] Overbeek (1911-2007) was donated by his family to his old department at the University of Utrecht.

In 1946, Overbeek succeeded his predecessor Hugo R. Kruyt (1882-1959), who was an internationally renowned colloid chemist. In the early 1930s, Kruyt had also been instrumental in founding the Dutch organisation for applied sciences (TNO) and in the years immediately after the war he became its President. In 1923, Kruyt wrote a booklet as an introduction to physical chemistry which was later revised in several editions by Overbeek. The book was set literature for students of biology, medicine, dentistry and veterinary science for many decades; the final, 19th, edition was published in 1977.

This paper discusses the general state of chemical research and education at the University of Utrecht in the 20th century. In particular, however, it reconstructs Overbeek’s impact on the growth of the discipline of chemistry in Utrecht, as well as the ‘hybridizing’ of chemistry and biology when these disciplines moved into new laboratories at the University of Utrecht’s campus De Uithof. The building was opened in 1974 and named Transitorium III. It was Overbeek who inspired the decision to locate the traditional disciplines in the peripheral parts of the building and the new interdiscipline of molecular biology at the centre.

In 1992 the building was renamed the Hugo R. Kruyt building, which many saw as a fitting commemorative tribute to a prominent colloid chemist and physical chemist. Archival material shows that Overbeek’s dedication speech at the presentation of a plaquette of Kruyt in the entrance hall of the building that now bore his name, on 28 October 1992, emphasised Kruyt’s role in bringing academia and society together. The science park of the University of Utrecht at De Uithof is an expression of this pursuit.

His successor also promoted this interaction, but Overbeek should also be remembered as a driving force in the ‘hybridization’ of chemistry and biology into molecular biology. Colloid and physical chemistry were instrumental in this artificial fertilisation, regardless of how difficult this amalgation proved to be.