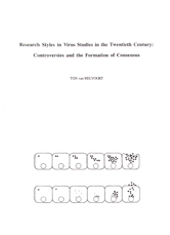 Controversies and the formation of consensus - Dissertation
(Maastricht: Rijksuniversiteit Limburg / University of Maastricht, 1993).

In the 1950s and 1960s the biomedical sciences saw a revolution which was characterized by one historian as The eighth day of creation. To a large extent this breakthrough took place as a result of the elucidation of the role of nucleic acid as the carrier of hereditary information and of the process by which this information is 'translated' in the synthesis of proteins. Institutionally, this led to the establishment of a new domain within science, viz. molecular biology. This branch of science was a hybrid of elements from different disciplines such as genetics, biochemistry, crystallography, bacteriology and virus research, and it soon gained great popularity. In turn these events were to be the prelude for the development of recombinant DNA techniques with which organisms could be genetically modified.

Besides the molecular biologists-to-be, there was in the 1950s another group of researchers who claimed an independent domain for themselves: the virologists. While molecular biology was in fact a hybrid between many disciplines, virology in a certain sense occupied a scientific domain which can be seen to have a predecessor. In the 1930s many textbooks were published which addressed viruses and virus diseases but, for most investigators, the study of such diseases was only a part of their normal duties. In the 1930s and 1940s viruses were studied from the point of view of pathology, bacteriology, immunology, serology, biochemistry, hygiene and epidemiology.

Around the middle of the 20th century important theoretical and social changes took place in virus research. These were reflected in the publication of books and the launching of several new periodicals which specifically centered upon virus research.

The establishment of virology as an independent discipline was based upon a new definition of viruses which was formulated in the 1950s. This 'modern concept of virus' rested on two assumptions. In the first place, that hereditary information of living organisms is encoded in nucleic acid, i.e. in the sequence of the building blocks of nucleic acid, the nucleotides. Secondly, the claim that viruses reproduce in such a way that this can be used as a criterion to distinguish them from other micro-organisms. Whereas micro-organisms (and cells in general) multiply by binary fission, it became accepted in the 1950s that viruses cannot grow but exclusively reproduce through their genetic material. It was assumed that, instead of undergoing a process of multiplication by growth and division, the virus particle passes through a so-called eclipse, that is to say, it temporarily disappears as an infectious entity.

The concept of virus which was formulated in the 1950s was in essence a definition in chemical terms. In 1957 Andre Lwoff, a member of the Institut Pasteur in Paris, proposed the following definition: "viruses are infectious, potentially pathogenic, nucleoproteinic entities possessing only one type of nucleic acid, which are reproduced from their genetic material, are unable to grow and to undergo binary fission, and are devoid of a Lipmann system." Because a virus could, on the basis of its infectivity, be distinguished from other genetic material, Lwoff concluded that "viruses should be considered as viruses because viruses are viruses."